In the canton of Zürich, smart traffic sensors measure and analyze travel times for strategic planning-tasks. The collected data is used to provide in-depth insights about changes in traffic patterns, identify time-critical route sections and reveal the competitiveness of the transport means.

( Zürich, Switzerland / Vodskov, Denmark, 16 February 2016 ) – The metropolitan area of Zürich is experiencing both rapid growth and increasing traffic volumes. This development has led to a significant increase in both the public transportation sector, with more and more commuters, as well as the number of vehicles on the roads.

Faced with the challenges of optimizing and improving the road infrastructure, the Office of Transport of the canton of Zürich needed a solution to help provide detailed traffic information.


In 2013, a network of BlipTrack sensors, from Denmark-based information technology company BLIP Systems was installed by Innolutions GmbH, along specific routes in and around the canton of Zürich.

In the 5-year project, over 80 sensors will measure real-time travel times and analyze road traffic on 50 main routes. The collected traffic information, which is analyzed and documented by DTV-Verkehrsconsult, is primarily used for strategic-planning tasks, such as identifying time-critical route sections, provide information about alternative routes that are not signaled, and detecting changes in traffic patterns. In addition, by comparing travel times, the competitiveness of transport means on particular relations is revealed. These results are also considered in regional traffic concepts.

\”The main reason for installing the sensors is to gain data about travel times and to get an idea of how the quality in transport is developing.The development and knowledge of the travel times helps us to identify potential for improvements in our road network.” says Christian Ordon, project leader at the Office of Transport of the canton of Zürich.

“We conducted an independent field test in 2011 to investigate the options of using Bluetooth-technology in terms of traffic management. The results, especially in collecting travel times and turning ratios were convincing. Bluetooth-technology is the easiest way of collecting valid data for a travel time measurement,” says Thorsten Kathmann, project leader at DTV-Verkehrsconsult.

“The installation and commission of BlipTrack sensors is easy and user-friendly. All traffic information is presented in real-time and in selectable graphics, accordingly to the wishes of the user,\” says Remo Schiltknecht, project manager at Innolutions GmbH.

“We value the long-term cooperation with canton of Zurich and with all the parties involved in the project. It is a privilege to work with such dedicated and professional people. We look forward to be a part of Zürich´s ongoing plan to be one of Europe´s most progressive cities,” says Mads Bo Andersen, Sales Manager at BLIP Systems. 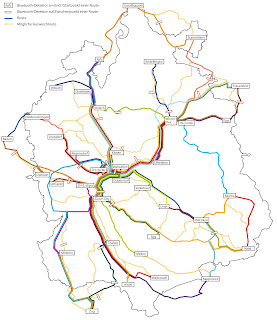 The Office of Transport is considering using the solution for permanent travel time measurements. This will enable the canton of Zürich to create an even better scheme of the daily commute and road network improvements. In addition, the canton is considering using the data to provide drivers with real-time traffic information, such as driving times and alternative routes, which will ultimately help to improve the economic benefits through reduced travel times, fuel consumption and vehicle emissions.

Besides measuring and improving traffic in Switzerland, the BlipTrack solution is successfully employed in optimization efforts for road traffic in New Zealand, USA, UK, Denmark, Sweden, Norway, Canada and Ireland. BlipTrack is also implemented in more than 25 international airports, including Genève, New York, Cincinnati, Amsterdam, Dubai, Dublin, Toronto, Milano, Barcelona, Auckland, Brussels, Oslo, Manchester, Copenhagen and Helsinki. In recent years, the solution has also been rolled out in ports, train stations, ski resorts, amusement parks, and at events all over the world.


About BLIP Systems
BLIP Systems is a privately-held information technology company with headquarters in Vester Hassing near Aalborg, Denmark. The company was founded in 2003 as a management buy-out of the Bluetooth activities within L. M. Ericsson Denmark. Today, BLIP Systems is one of the leading providers of data analytic tools to transform traveler flow into value, and creating easy-to interpret decision-making tools of end-users. The in-house designed BlipTrack solution consists of high-tech sensors, a hosted analysis platform and a web-based user-interface.


About canton of Zürich
Zurich is the motor that drives Switzerland. The well-developed transport networks are the arteries of Zurich’s economy. Twenty-eight S-Bahn railway lines on 592 km of tracks and 7354 km metres of national, cantonal and municipal roads provide the infrastructure. Both Zürich Airport and railway station are the largest and busiest in the country. 1.4 million people live in the Canton of Zürich, its capital has approximately 400’000 inhabitants. The city itself is a important hub for railways an roads.


About DTV
The DTV-Verkehrsconsult GmbH is a consultant company founded in 2004 and based in Aachen, Germany. The company has grown to one of the market’s leading companies for editing and analyzing traffic data in Germany. Additionally, other areas, such as type approval, field tests, traffic planning and traffic safety have been established within the last years. DTV-Verkehrsconsult is a strong and reliable partner for ministries, federal authorities and other decision makers that deal with traffic-related issues.

About Innolutions
Innolutions GmbH is an independent, privately-owned technology company, based in Villnachern, Switzerland. The main activity of the company is the delivery of highly customized services and hardware to the public authorities on any level, as well as to private companies such as engineering offices. With more than 14 years of experience in the local market, Innolutions is well linked to their customers and has an excellent understanding of their needs.