Current And The Future State of IoT (Internet of Things):

Internet of Things (IoT) is a smart way of interconnecting the physical devices such as home appliances, vehicles, traffic lights, android or IoS devices with the other embedded sensors and software emerging a wireless connectivity among them. It reduces consumption of time, energy and the effort needed for the manual and mental work just by providing the required data to us accessible anywhere.

Current scenario:
The growth of IoT in the market has been tremendous until today. Around 17 Billion users across the world are in touch with IoT devices excluding past smartphones, tablets, laptops, and other Android, Windows or IoS devices. Some of the recently developed devices are prayer beads, customized light bulbs, smart water system, ring alarm, etc. These devices are completely automated by the sensors and electronics embedded to them. The connection to our smartphones gives access to the data and allows to control them.

Future of IoT:
IoT in the next decade gives birth to Li-fi, smart homes, smart cities, autonomous cars, wireless energy transfer, wearable devices and usage of sensors for automation in all industries.

Li-fi (Light fidelity and visible light communications):
Utilization of light as a mode to transmit data due to its extraordinary transmission speed. In comparison to Wi-Fi, Li-Fi has proven to be faster and secure for data transmission. Interconnecting Li-fi with IoT opens up abundant solutions for technological advancements.

For Instance: Controlling the IoT enabled light emitting devices through your phone for altering colors, brightness, and timers.

Smart Homes, Cities & Autonomous Cars
Smart homes and cities will be ruling the future due to its high tech capabilities to automate machines through the technology of interconnecting devices. It will enable us to control home appliances and access data, record weather data, beware of the weather forecast, crisis and emergency situations and keep track of environmental cleanliness.

Some of the features of IoT are already popular in the cars manufactured today. Complete automation of a vehicle without a driver is estimated to reach the market by 2045. The IoT enabled car can handle all controls from driving in all kinds of roads, obstacle avoidance, speed control, GPS locations with shortest routes and lowest traffic. This reduces the need to hire drivers.

Wireless Charging:
Wireless energy transfer was first initiated by Nikola Tesla from the concept of electromagnetic induction. All the battery operated devices utilizing wireless charging techniques comply with Qi standards. This allows multiple devices to charge in a single station. Wireless charging is mandatory for IoT due to the operation of wireless connectivity over devices. This ability to transfer energy will expand giving opportunities to connect all our devices to solar satellites that collect solar power and direct the beams back to earth for charging our devices.

Wearable devices:
Wearable devices have reached the market and are inconsistent demand from the tech-savvy customers. Medical devices, smart wrist-wear, and smart clothes function with the IoT integration in it. Users can keep track of the health statistics, be aware of the daily nutrients intake, a reminder to consumption of medicines or food at the required time and share data with many other devices. 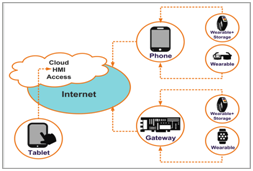 Other industries:
IoT is beneficial to almost all the industries due to their dependency towards technological devices. Some of the miscellaneous examples include monitoring the farming land, looking after the elderly and your properties. The sensors attached to the IoT enabled devices to provide data to soil and weather conditions, health statistics of the elderly and the IP enabled connection to the security cameras at home.

Thenceforth, from the constant support and demand from the tech-savvy customers and ongoing successful researches, the advancements in technology are expanding. IoT is a thriving sector which can assist all the industries in the future on implementing the inventions.